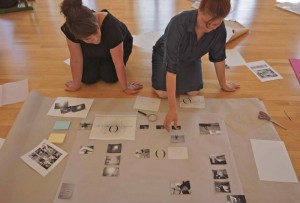 The Cyclopedia Choreo-graphic Figures: Scoring Aesthetic Encounters is a vivid archive of findings and distillations out of the research process embedded in the Research Catalogue. The Cyclopedia aims at ‘scoring an aesthetic encounter’ with the multimodal — visual, textual, sonic, performative — findings from the artistic research project Choreo-graphic Figures. It is a constellation of emergent ‘choreo-graphic figures’ and inter-related systems of notation and annotation, documents and scores. The Cyclopedia is conceived as a constellational system, interweaving aesthetic, poetic and performative sensibilities so as to activate their specific relational epistemological potential. We seek a multi-modal approach, proposing a mode of exposition that unfolds less as the linear explication of process, but rather – like artistic process itself – more as an assemblage of overlapping and concurrent components.

The task: Our research project seeks to explore the performativity of notation, developing shared figures of thought, speech, and movement for making tangible those forms of ‘thinking-feeling-knowing’ produced within collaborative exchange, between the lines of drawing, choreography and writing. We seek to give tangible articulation to the meaning and weight of relations as generative forces within the making of knowledge, attending to the flows of thinking (with and between) operative within artistic enquiry, and in recording these modes of (non-)visual sense-making.

We ask: What system of notation could be developed to communicate the instability and mutability of the flows and forces within practice, without rendering them still or static, without fixing that which is contingent as fixed or literal sign?

We propose the concept of the choreo-graphic figure, interested in how the embodied practice of choreographic performance (in an expanded sense) might become a tool of inscription and notation in itself. The ‘choreo-graphic’ figures we seek are multi-dimensional, durational, relational intensities, a ‘poetic’ vocabulary of movements (movement-images, movement-words, movement-moving).