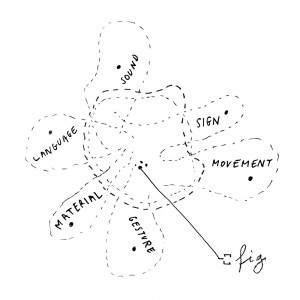 Choreo-graphic Figures: Deviations from the Line

is an interdisciplinary research collaboration involving artist Nikolaus Gansterer (AT), choreographer Mariella Greil (AT) and art-writer Emma Cocker (UK) in dialogue with a team of international critical interlocutors including Alex Arteaga (ES/D), Lilia Mestre (PT/BE) and Christine de Smedt (BE). With ‘arts-based research’ at its heart, Choreo-graphic Figures: Deviations from the Line stages an interdisciplinary, inter-subjective encounter between the lines of drawing, choreography and writing in order to investigate those forms of ‘thinking-feeling-knowing’ produced within collaborative exchange. The project unfolds through a series of intensive ‘method labs’ where the key researchers (and invited guests) come together geographically in one place to practice thinking-moving relationally and to develop singular and sharable forms of practice-as-research. Choreo-graphic Figures: Deviations from the Line (2014 – 2017) is funded by the Austrian Science Fund FWF/PEEK.

Choreo-graphic Figures: Deviations from the Line addresses two interconnected aims: (1) To explore the nature of ‘thinking in action’ or thinking-feeling-knowing’ operative within artistic practice, especially produced within collaborative exchange, between the lines of drawing, choreography and writing; (2) Explore forms of performativity and notation for sharing and reflecting on this often hidden or undisclosed aspect of the creative process, developing shared figures of thought, speech, and movement (choreo–graphic figures) for making tangible this enquiry. Through processes of exchange our research seeks to pressure choreography, drawing and writing beyond the conventions, protocols and domains of each discipline: for choreography, beyond the domain of the body and space of the theatre; for drawing, beyond the domain of the two-dimensional page; for writing, beyond the domain of language, the regime of signification. Choreo–graphic Figures: Deviations from the Line interrogates the interstitial processes, practices and knowledge(s) produced in the ‘deviation’ for example, from page to performance, from word to mark, from line to action, from modes of flat image making towards transformational embodied encounters. The collaborative research quest is one of tracing and understanding these permeable frontiers, to challenge the assumptions of the clear-cut disciplinary line and produce new articulations of ‘expanded practice’ between the lines of drawing, choreography and writing.

Central to this research project is an attempt to find ways of better understanding the processes of research in-and-through practice – the unfolding decision-making, the dynamic movements of ‘sense-making’, the durational ‘taking place’ of something happening live – and for asserting the epistemological significance therein. We seek to give tangible articulation to the meaning and weight of relations as generative forces within the making of knowledge, through a live diagramming of the flows of thinking (with and between) operative within artistic enquiry. We ask: What systems of notation can we develop for articulating the barely perceptible micro-movements and transitions at the cusp of awareness within the process of artistic “sense-making”? How might we communicate the instability and mutability of the flows and forces within practice, without fixing that which is contingent as a literal sign?