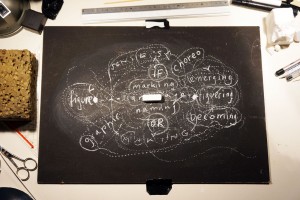 Abstract
Drawing on the artistic research project Choreo—graphic Figures: Deviations from the Line
(2014 — 2017), this chapter explores how we have practiced a shift within our
collaboration from the disciplinary gestures of drawing, writing and choreography
towards the aesthetic-epistemological gesture of artistic (re)searching, to give tangible
articulation to the pre-gestural register of ‘vitality forces and affects’ (which we call
figuring) operating before, between and beneath the more readable gestures of artistic
practice. Bringing our practice-as-research into dialogue with theory (including
Brandstetter, Flusser, Manning, Massumi, Sabisch, Stern) we reflect on our own
attempt to render communicable the dynamic experience of figuring within the creative
process, through the production of (choreo—graphic) figures, an expanded system of
vitality gestures and embodied diagrammatics.
Key words: aesthetic episteme; attention; embodied diagrammatics; figure; figuring;
notation; practice-as-research; praxis; prenoetic; vitality gestures

Drawing on the research project Choreo-graphic Figures: Deviations from the Line, this chapter addresses the emergent ‘gestures of (re)searching’ (Flusser, 1991/2014) developing within our interdisciplinary, artistic exploration, especially those forms of ‘thinking-in-action’ produced collaboratively ‘between the lines’ of drawing, choreography and writing. Our shared quest is towards a vocabulary that reaches beyond the conventions, protocols and domains of each discipline: pressuring, translating and in turn expanding the ‘gesture of drawing’ (Newman & Zegher, 2004), the ‘gesture of writing’ (Flusser, 1991/2014) and the ‘gesture of choreography’ through the friction, contamination and convergence of verbal-linguistic, spatial-visual and bodily-kinesthetic sensibilities. The intent is to explore the points of resonance between our disciplinary languages (e.g. identifying shared gestures of ‘opening’ and arriving; gestures for ‘emptying out’ or clearing away; gestures for warming up, tuning in and for getting started, gestures for generating momentum within practice), whilst also attending to the disparities and interferences emerging through circulation and translation, the excesses of meaning, moments of intransigence and (in)translatability. We practice a shift from a realm of demarcated disciplinary gestures towards the undisciplinary becoming attuned to the ‘vitality gestures’ operating behind, below and in the intervals and thresholds between; moving towards ‘differential composition’ “that undoes each time anew the preliminary split between movement and language, sensation and signification” (Sabisch, 2011: 129).

Specifically, in this chapter, we elaborate the relation between (1) The event of figuring (the live and felt experience of ‘vitality forces and affects’ (Stern, 2010) within our process of artistic exploration) and (2) The emergence of figures (conceived as a form of ‘vitality gesture’ through which the experience of figuring coalesces into recognizable, communicable form). We propose the term ‘figuring’ to describe the small yet trans­formative energies, emergences and experiential shifts that operate before, between and beneath the more readable gestures of artistic practice. We ask: What kinds of ‘vitality gestures’, ‘dynamic indicators’ (Stern, 2010) and related an/notations can be developed for attending to and articulating the barely perceptible micro-move­ments and transitions at the cusp of awareness within the process of artistic “sense-making”? How might we signal towards the insta­bility and mutability of the flows and forces within practice, without fixing that which is contingent as a literal sign?

We use the term ‘figure’ to describe the point at which figuring’s dynamic vitality coalesces or crystallizes into a recognizable form. We conceive of the ‘figure’ as a ‘vitality gesture’ capable of remaining in fidelity to, whilst still communicating (to others), the experience of figuring from which it emerged? We ask, how might different performed figures create the conditions for different experiences of figuring? We further develop the concept of the ‘choreo–graphic figure’ as a kind of ‘embodied diagram’ for organizing and bringing into relation – or else even for producing or giving rise to – a constellation of related figures. ‘Choreo–graphic figure’ conceived as a per­formative, relational and contingent assemblage, identifiable whilst at the same time motile, elastic, capable of evolving. A multimodal, multi-dimen­sional, durational intensity; performed entangle­ment of visual-spatial, verbal-linguistic, bodi­ly-kinesthetic sensibilities. We ask, how might the choreo-graphic figure be a system of diagrammatic notation in and of itself?

This book chapter, Choreo-graphic Figures: Vitality Gestures & Embodied Diagrammatics, was invited for development following conference presentation at the international conference Body Diagrams: On the Epistemic Kinetics of Gesture, German Semiotics Congress, Tuebingen, Germany 2014. The content of this chapter draws on the first year and half of our research project, with further reflective pressure applied through participation in conferences including How To Do Things with Art (Aarlborg, Denmark, 2015) and our research residency Radical Scores of Attention at Tanzquartier, Vienna, Austria (December 2015). It builds on ideas published as artists’ pages, Notion of Notation >< Notation of Notion, in Performance Research, ‘On An/Notations’, 2015 (See On Notation). In this chapter, we elaborate a sense of the theoretical and conceptual terrain against which we understand the relation between two key interrelated terms within our research: the notion of figuring and the (choreo-graphic) figure.