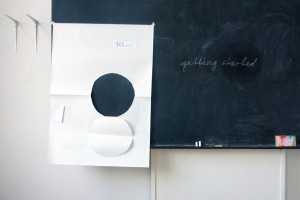 In this online multi-media research article published in RUUKKU: Studies in Artistic Research, we – Nikolaus Gansterer, Mariella Greil and Emma Cocker – share findings from the prologue phase and year one of our three-year research project Choreo-graphic Figures: Deviations from the Line, during which we have explored how various processes of ‘beginning’ performed within live artistic activity might create the conditions for processes of emergence to arise. We present a series of emergent ‘figures’ developed within this research project for articulating ‘beginning’ within a collaborative artistic process (e.g. which at the time of publication were provisionally called Figure of Circulation, Figure of Shared Vibrations, Figure of Clearing, Ordering and Emptying Out, Figure of Touch and Reaching Towards the Other), alongside reflecting on and attending to the process of emergence within artistic labour itself – a process we have called ‘figuring’. Figuring – we use this term to describe those imperceptible or barely perceptible movements and transitions at the cusp of awareness within the process of “sense-making”: the moments of revelation, epiphany, synchronicity, of change in tack or direction or pace, the decision to stop, do something different, begin again. Figuring manifests within those threshold moments within the creative process that are often hard to discern but which ultimately shape and steer the direction of the evolving activity. Our research involves cultivating practices of attention (a perceptual heightening, hyper-sensitizing, sharpening of alertness) for noticing these emergent figurings within the process of creative activity, and devising systems of notation for identifying, marking and even tentatively naming these processes of emergence. In developing this exposition, our intent has been to remain faithful to the process of investigation itself. Rather than being conclusive, our exposition reflects the process of its own production; itself a diagramming of the multiple and at times competing forces and energies operative within the process of artistic collaborative practice. Our exposition unfolds less as the linear explication of a process, but rather — like artistic process itself — more as an assemblage of overlapping and concurrent components, where attention shifts between the textual and the visual, between what is sayable and what is shown.

Publication context: Process in artistic research: Various processes are an indistinguishable part of the practices of art and research. Ever since the 1960s when works of art evolving in time or transforming in shape were presented to viewers, listeners, and participants, ‘process’ has been one of the magic words within contemporary art. Repetition, variation, and works based on interaction are examples of compositional methods that underline happening and change, instead of the complete, monolithic, and intact work of art. Comparing variations and analysing transformations are common methods of artistic research. In performing arts process is essential since the skill and knowledge of the artist are accumulated in a corporeal manner. Understanding is developed in interactions between musicians, actors or dancers; we can speak of encountering unknown layers or, in line with Michel Foucault, an archaeology of skill. Opening up and articulating artistic processes is considered one of the main tasks for artistic research. At the same time, developing new interactive processes is one of the societal duties of contemporary artists and artistic researchers. Established in 2013, RUUKKU is a multidisciplinary, peer-reviewed journal for artistic research. It is published on Research Catalogue (RC), an international publication platform and database that enables multimedia elements. RUUKKU is published in Finnish, Swedish and English. (see http://ruukku-journal.fi/en) The fourth issue of RUUKKU, published in Spring 2015, focused on the theme of ‘Process in Artistic Research’.