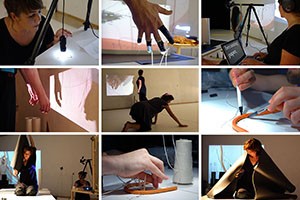 The stated intent of Method Lab I was to focus on the sharing of practice and working methods between the key researchers, in order that set disciplinary ways of operating might gradually become undisciplined, unlearnt, undone, reversed, upturned by experimenting ‘between the lines’ of drawing, choreography, and writing. This aim of this phase was generative: the intent was towards experimental production, performed in subjunctive key of ‘what if’. Rather than asking: “What is drawing, what is choreography, what is writing?” this research phase asked ‘what if’ these definitions are stretched? How elastic can these terms be made? What if line becomes movement or sound; what if language is danced; what if words are drawn rather than written? Method Lab I sought to challenge disciplinary demarcations between drawing, choreography and writing, by performing a ‘line of flight’ or movement towards the critical condition of ‘unbelonging’.

Method Lab I developed and extended working principles and processes initiated during the pilot projects, Beyond the Line I & II (see Archive), specifically the interrelation between three key components:

Live exploration: designated period of time during which we – the key researchers, Gansterer, Greil and Cocker – work together towards the embodied production of sensual knowledge, generated through live processes of exploration and experimentation.

Conversational/Dialogic Exchange: conversation and reflection as material, site for the production of collaborative and inter-subjective ‘figures of speech’ and for initiating poetic modes of ‘sense-making’.

Structure of the Method Lab I

Framed as a research residency within the context of ImPulsTanz 2014, Method Lab I took place at Probebühne des Schauspielhauses, Vienna, 16 July – 11 August 2014. The ‘lab’ comprised an intensive programme combining the principles of Live Exploration, Practices of Attention and Conversational/Dialogic Exchange, supported through the attendance of workshops and performances from within the ImPulsTanz programme, as well as through the involvement and provocation of project sputniks (Alex Arteaga and Lilia Mestre) and critical guests (Werner Moebius and Jörg Piringer).

Whilst the Method Lab evolved as an organic and iterative process, it is possible to discern two main phases of activity corresponding with the two research foci of the project: Phase 1: The development of methods for attending to the nature of ‘thinking-feeling-knowing’ (or ‘figuring’) operative within artistic practice; Phase 2: The development of systems of notation (or ‘figures’) for sharing and reflecting on this often hidden or undisclosed aspect of the creative process.

Phase 1: Attending to the Moments of ‘Figuring’

We began Method Lab I with an extensive list of potential ‘figures’ identified from within the arc of artistic endeavor, which through our research we hope to elaborate.

Whilst some of these proposed ‘figures’ could be recognized visually as particular movements, gestures or postures within the unfolding of an artistic endeavour, others operate rather more below the register of visibility, at a more corporeal, sensorial and affective level of awareness. Through our research we realized that our intent was not only to attend to the visible or perceptible processes and gestures within artistic practice; but also to articulate the often unnoticed, imperceptible, invisible or undisclosed moments within a live artistic enquiry. Our collective enquiry is one of identifying those recurrent moments – the micro-movements or micro-gestures, the small yet transformative energies and emergences – which operate before, between and beneath the more readable gestures of artistic practice. Yet, through what means might these micro-movements be annotated and shared? Herein, lies the challenge: how might one devise a system of notation for articulating that which resists articulation, for that which is pre-articulation, or a form of representation for the non-representational.

Working closely with sputnik Alex Arteaga, the first phase of Method Lab I sought to put pressure on these concerns. We recognized the importance of cultivating attention towards the moments of ‘figuring’ within practice. Figuring: we coined this term to describe a state of emergence (an emerging presence) or experiential shift, those imperceptible or barely perceptible movements and transitions at the cusp of awareness within the process of artistic ‘sense-making’: the moments of revelation, epiphany, synchronicity, of change in tack or direction or pace, the decision to stop, do something different, begin again. Figuring manifests within those threshold moments within creative practice that are often hard to discern but which ultimately shape and steer the direction of the evolving activity.

During the first phase of Method Lab I, we devised an initial working method and notational system for attending, ‘marking’ (and attempting to name) the emergent moments of ‘figuring’ within artistic enquiry, which we tested within the context of a series of Live Explorations. This emergent system of notation will be further tested and elaborated as part of a forthcoming research residency at a.pass entitled Notion of Notation <> Notation of Notion (see news section).

Part 2: Towards the ‘Choreo-graphic Figure’

Working closely with sputnik Lilia Mestre, during the second phase of Method Lab I, our focus shifted from an interest in the process of ‘figuring’ (in and of itself) towards an interrogation of the ‘figure’, specifically the ‘choreo-graphic figure’. We use the term figure to refer to the point at which figuring coalesces into a recognizable and repeatable form. We asked: what system of notation could be developed to communicate the instability and mutability of the flows and forces (or ‘figuring’) within practice, without fixing that which is contingent as a fixed or literal sign. Central to this project is the conceptualization and practice of the ‘choreo-graphic figure’ – the figures we seek are multi-dimensional, durational, relational intensities, a ‘poetic’ vocabulary of movements (movement-images, movement-words, movement- moving). Working with Lilia Mestre, the second phase of the ‘lab’ involved a process of selection and distillation, where key moments from our earlier exploratory investigations were revisited and re-performed as a sequence or ‘configuration’ of different yet overlapping ‘figures’. Different versions of this ‘configuration’ were presented to critical guests (Werner Moebius and Jörg Piringer) for feedback, as well as performed as a public event within the ImPulsTanz programme. We subsequently identified key episodes from within the configuration, which we then performed to video camera as a series of discrete and recognizable ‘figures’ and provisionally named (e.g. Fig. of Opening, Fig. of Clearing, Fig. of Emptying Out, Fig. of Circulation). The performed ‘configuration’ and moving image ‘figures’ were further tested and elaborated as part of a research residency at a.pass entitled Notion of Notation <> Notation of Notion in March 2015. One focus for this new phase was the elaboration of a more poetic (rather than descriptive) system for ‘naming’ the emergent figures.