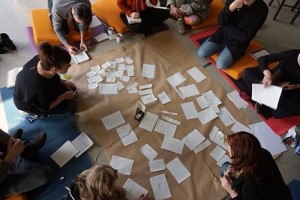 Part of the work block “Conditions for the Emergence of Poetics” initiated by Lilia Mestre.

During February 2015, we – Nikolaus Gansterer, Mariella Greil and Emma Cocker – led an intensive research workshop at a.pass – Centre for Advanced Performance and Scenography Studies, Brussels. For a.pass, our intent was to share and put pressure on our recent explorations from the project Choreo-graphic Figures: Deviations from the Line, specifically around the ‘notion of notation’ and the ‘notation of notion’, through live investigations, presentation and discussion with a.pass research participants and wider publics. We proposed to investigate notation (and its related technologies) through two concepts: figuring and figure.

The Notion/Notation of Figuring: We use the term ‘figuring’ to describe the small yet transformative energies, emergences and experiential shifts which operate before, between and beneath the more readable gestures of artistic practice, the barely perceptible movements and transitions at the cusp of awareness within the process of “sense-making”. What different systems of notation can be developed for cultivating awareness of and for marking and identifying the moments of “figuring” within live investigative action?

The Notion/Notation of Figure: We use the term ‘figure’ to describe the point at which figuring coalesces into a recognisable form, figuring’s dynamic vitality crystallised towards communicable content. How then might the performed ‘figure’ be a system of notation in and of itself?

Each day comprised a series of different sessions specifically drawing on and performing versions of the three central methodologies of the project Choreo-graphic Figures:

Day 1: This first session was used for sharing and developing an initial working toolkit of methods and approaches in relation to notation and annotation by inviting responses to the questions: What is notation/annotation? How do we approach the idea of notation from our different disciplines and practices? The afternoon session began with a Practice of Attention, followed by a Live Exploration undertaken through a series of tasks, aimed at inviting action-reflection on different sensory modes of attention and notation, and the relation between the experience of witnessing and being witnessed: (1) Choose one of the senses and follow it: proprioceptive, visual, tactile, auditory, olfactory (2) Witness – interior/exterior (objects, relations, another, attention); (3) Pause (for a ‘felt’ 10 minutes) by: Closing your eyes, or being still, or being silent or any combination. Then, for the remaining time … activate the space with the opposite.

Day 2: Following our own ‘Method Lab’ Structure, the second day of the workshop began with a process of Conversational/Dialogic Exchange: What questions and issues had arisen through the previous days Live Exploration? What are the terms and issues that need further scrutiny and pressure? We shifted from the notion of conversation-as-reflection to conversation-as-material through a closer material investigation of notes made by the group, as a physical paper-mapping exercise. This led into an afternoon Live Exploration where we attempted to introduce our concept of ‘figuring’ – a state of emergence or experiential shift – inviting participants to attend to the moments of ‘figuring’ within their own live exploration.

Day 3: Central to the third day was an attempt to address the material and affective aspects of language. Staged as a series of exercises in pairs and working with fragments of language generated in the previous day, we explored the following: How does language feel when you turn it over in your mouth? How does it sound when you try not to articulate meaning with it? Attend to the moments when language is liberated from being a carrier of information. Pay attention to the rhythm, inflection and modulation of language. Be touched by the words in your mouth. Explore language through repetition and difference. Pay attention to the cadence of language with all its minor variations, or attend to the space between the letters by stretching and expanding sound. From these various language exercises, we moved into a further Live Exploration, inviting the group to further attend to moments of figuring and if possible devise a system for marking or notating these emergences and intensities.

Day 4: Based on the previous day’s Live Exploration, we engaged in a Conversational/Dialogic Exchange for reflecting on the relation between the experience of figuring and the readable activity that ‘gave rise’ to this experience. We asked the group to identify one key moment from their notations (or memory) – this could be a sequence, a passage, a moment or action (We use the term ‘figure’ to describe this point at which figuring coalesces into a recognizable and communicable form). Could they identify the context for the arising of this figure? What were the conditions of its emergence, or rather how did it become? What else was happening that enabled this figure to emerge? Who else/what else is required? They were each invited to find a way of notating this figure (sequence, passage, moment, action, activity etc.) in a way that could be shared with others. Was it possible to give the ‘figure’ a name – here, the offering of a name is not conceived as a means of ‘fixing’ the figure but perhaps more like an act of ‘calling something into existence’, beckoning. Did the ‘figure’ have discrete segments, which could have the capacity for being isolated and separated into component parts? During the afternoon, we reassembled with the view to scoring a configuration (a sequence or assemblage of different but related figures). Each person shared their figure through the live annotation of their own notational system. We reflected: How can these different approaches be ‘scored’ as a single choreo-graphic ‘configuration? How do we plot the conditions of their emergence? Who else/what else is required? What shape might this configuration have? Are there other ways of organizing the configuration other than chronological?

Day 5: On the final day of the workshop we co-devised an ‘open score’ based on the figures identified from within the earlier exploration, which we subsequently performed together as a public sharing. We conceived a set of continuum conditions for the performed configuration, which were based on the principles of a walking wave and the figure of the witness. When individuals were not actively involved in activation of a figure, or part of the conditions of a figure’s emergence (part of the situation that makes something happen), they were invited to participate in either rejoining the walking wave, or witnessing from the edge.

The conceptualization of an ‘open score’ structure – with designated continuum conditions conceived as the ‘ground’ from which other emergent figures might arise – was a significance development within our working methodology, enabling the possibility of a closer relation between the experience of Live Exploration and the possibility of its public sharing. Many of the lines of enquiry and experiment emerging at a.pass have since been developed further, specifically within the context of the Summer Method Lab II (Vienna, July – August 2015), where we continued to apply pressure to the materiality and affectivity of language, towards the production of Radical Scores of Attention.

We would like to thank all individuals who took part in our workshop at a.pass, whose energy, commitment and provocation helped to question and pressure our research enquiry at this critical time.