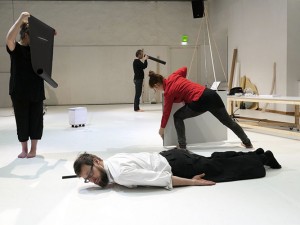 During the Winter Lab 2015, we – Nikolaus Gansterer, Mariella Greil and Emma Cocker – worked in dialogue with Lilia Mestre and Werner Moebius, towards the production of Radical Scores of Attention II generated through an exchange of practices and methods for exploring the vibrant materiality of speech, language and the reverberation of voice. The Winter Lab involved three distinct phases of activity:

In advance of the Lab itself  the key researchers focused on developing critical content for a book chapter, Choreo—graphic Figures: Vitality Gestures and Embodied Diagrammatics, which will be published in the forthcoming academic publication, Body Diagrams: On the Epistemic Kinetics of Gesture (eds. Irene Mittelberg and Alexander Gerner), Gesture Series, John Benjamins Publishing, Amsterdam. Drawing on the research generated through our project, Choreo—graphic Figures: Deviations from the Line, this chapter addresses how we have practiced a shift within our collaboration from the disciplinary gestures of drawing, writing and choreography towards the aesthetic-epistemological gesture of artistic (re)searching, to give tangible articulation to the pre-gestural register of ‘vitality forces and affects’ (which we call figuring) operating before, between and beneath the more readable gestures of artistic practice. Bringing our practice-as-research into dialogue with theory, within this chapter we reflect on our own attempt to render communicable the dynamic experience of figuring within the creative process, through the production of (choreo—graphic) figures, an expanded system of vitality gestures and embodied diagrammatics. The process of developing content for the chapter has involved extended periods of conversation for critically reflecting on our shared practice, as well as for elaborating through close reading and discussion on excerpts from different theoretical sources including Gabriel Brandstetter, Vilém Flusser, Erin Manning and Brian Massumi, Petra Sabisch, and Daniel Stern. The resulting conversational transcripts are taken as a starting point for developing the chapter (More about the chapter soon in our Publication: On Body Diagrams)

During the second part of the Winter Lab, the key researchers worked intensively in the studio at Tanzquartier with Lilia Mestre and Werner Moebius, to further test the experimental permutational score system that we initially developed at the end of the Summer Method Lab II (2015) with Alex Arteaga and Christine de Smedt. This permutational score was conceived as a means for bringing our three core modes of practice (A: Attention; B: Exploration; C: Conversation) into choreographic relation, a device for investigating how practices of attention and conversation impact upon artistic exploration as a means for sharpening, focusing or redirecting one’s attention. We asked: how can we use different questions, score structures, constellations and durations to put pressure on different aspects of our investigation? At this stage in the project, our score comprised nine different ‘activity fields’, each of which invited a different quality of embodied, relational engagement. Within the context of a Live Exploration (a specified time-frame for working together in the studio), these nine activity fields can be ‘called’ into play, for example, by someone calling for A1 or C3 etc. The nine activity fields comprised:

These specific ‘options’ are conceived as means for cultivating shared attention, perceptual awareness, sensory heightening or hyper-sensitizing, qualities of alertness and receptivity.

A1 – Walk: This ‘call’ invites a ‘slow walk’ together in the space (We take one step with the in breath, one step with the out breath and so on). During public presentations, we also have invited our witnesses (audience, guests) to join us in this slow walk.

A2 – Vocal: this ‘call’ involves a vocal exercise performed in relative stillness where different letters are sounded on an outbreath, in conjunction with the movement of the head – A: from left to centre; O: from right to centre: E: head looking up to centre; M: head looking down to centre. Different lengths of breath thus create moments of vocal synchronicity and divergence.

A3 – Shake: Whilst A1 and A2 have a quality of stillness, slowness, the harmonizing of voice and action, this ‘call’ actively generates shared intensity and energy through the vibration and agitation of one’s body (within the capacity to be performed through minor or emphatic movement, or even through the activation of sound and materials)

These ‘activity fields’ relate closely to what we have elsewhere called ‘Figures’. Each refers to a specific qualitative mode of aesthetic production or exploration, the properties of which we have gradually been able to differentiate, through the experience of testing and experimentation.

B1 – Resonance and Dissonance: This specific ‘figure’ originated as an experiment in the shared act of walking together as a line — wave-like — back and forth across the studio space, performed as a live diagramming for experiencing the figuring of synchronicity as well as that of lagging, falling out of time. Additionally, we have tested a spoken notation system for making tangible the moments of felt dissonance indicated through a spoken ‘S’ sound, and the experience of resonance indicated with the vowel sound ‘A’. During the Winter Lab, this ‘figure’ evolved from a basic vocabulary of vertical and horizontal body gestures – walking, standing still and lying on the floor – to include the introduction of materials, which were used to amplify the moments of mirroring and synchronicity, as well as the negotiation between one another in space. The ‘figure’ of Resonance and Dissonance is one of empathetic orientation and precision, explored through heightened sensitivity to the relation of one’s body in space, in relation to others and to objects.

B2 – Ventilating Language: This ‘figure’ involves the transformation of words and language through introducing qualities of lightness and aeration; the liberation of language from the regime of signification and information through focus on the reverberation of speech and voice, the act of rolling language around in the mouth as a physical practice. The starting point for this field of experimentation has been the ever-growing pile of conversational transcripts from our project, which we use as a live material for playful appropriation and reworking. Whilst some of our experiments have focused on the repetition or recurrence of certain terms within our transcribed conversations – from comparative or associative terms such as ‘like’, to questioning terms such as ‘how’ – the emphasis within this ‘figure’ is towards animating or activating language through rhythmic, relational speech acts; through the affect of breath and air: the babble of overlapping voices reading together, echoes and translations, stutters and repetitions, whispered conversations assembled together from dislocated fragments of text.

B3 – Becoming Material: Whilst ‘Ventilating Language’ focuses on the transformation of words through the qualities of lightness and aeration, this ‘figure’ attends to a transformation of matter and materiality, through processes that push and test the potential of materials, and by extension the capacity of the self: material objects conceived as support, leverage, prop, prosthesis; material tangibility applied the event of looking, thinking, reflecting. Tilted, twisted, transformed through sensuous play and the practice of ‘feeling one’s way’, exploration of a material’s resistances and tensions, the relation of gravity and balance, revelation of unexpected properties and possibilities, expanding the definition of what both a material and a body can do.

These ‘activity fields’ conceive of conversation and reflection as material, site for the production of collaborative and inter-subjective ‘figures of speech’ and for initiating poetic modes of ‘sense-making’.

C1 – Key words: modeled on a game-like structure, the researchers (and their invited witnesses) generate written key words that are then used as a provocation for discussion: a key word is chosen; a given time between 1 – 4 minutes is selected, a response is invited. This process is repeated: individuals can elect to respond or chose a new word.

C2 – Roundabout: this activity involves quick and immediate reflection on the last phase of exploration, offering the possibility of illumination, insight or questions generated in relation to what has just taken place. This conversation is staged as a circle with the train of thought initiated by one person swiftly picked up by the next person.

C2 – Upwelling: Whilst ‘Roundabout’ emphasizes a continuous flow of conversation and a certain speed of exchange, this activity requires a slower level of attention, the tuning in to a vocabulary that seems to emerge or even ‘appear’ from the situation itself rather than from any singular subject.

We tested our permutational score – comprised of these nine fields of activity – through a series of Live Explorations of different duration, including a public presentation Radical Scores of Attention II at Tanzquartier on 12 December 2015. During this Lab, we continued to work closely with documenter, Viktor Jaschke, who had previously joined us in the Summer Method Lab earlier in the year. In dialogue with Viktor, we began to further test different strategies for generating still and moving-image material from our live explorations, considering how this material might function within the context of both page-based and web-based publication or as an autonomous video documents.

Following the public presentation we continued to work with Lilia Mestre, to both elaborate upon certain sections of the existing score as well as develop new fields of practice. Specifically, the addition of ‘Touch’ as an ‘Attention Practice’ introduced a heightened sensitivity to tactility and texture, a sensory engagement with objects and space through the act of ‘feeling one’s way’. Experimental modes of (impossible and paradoxical) translation were also explored often privileging or delimiting a specific sensory apparatus: for example, drawings made whilst blindfolded, objects encountered through touch alone (with eyes closed) and then re-drawn, material translations of attention scores. These various translational activities were partnered with the act of observation (both watching and listening) to form the fourth field of practice within our score system: